Kanaan & Tilney: The Case of the Arms Dealers

Get your copy at these fine retailers!


John Tilney—praeternatural pyrokinetic and mystery author—has noticed the bottom dropping out of the market for his usual gothic fare, so he goes to Lowell Kanaan, PI, for a crash course in noir. Lowell, a cranky wolf-shifter detective, isn't sure why he agrees to let John shadow him, though it might have something to do with John's weirdly endearing honesty...and pretty lips. John thinks he's found the perfect detective novel hero in Lowell, but it isn't long before he realizes he doesn't want Lowell for his book, but for himself.

Reviews for the First Edition:

Kanaan & Tilney: The Case of the Man Eater

Kanaan & Tilney: The Case of the Man Eater
Now available from these internet places!

Wolf-Beast and ex-cop Lowell recently brought his boyfriend, Elementalist and mystery author John, into the PI business with him. They've been solving cases for Boston's diverse praeternatural community ever since. When a young Terran feels that the brutal murder of his Beast boyfriend isn't being treated seriously enough by the police, he brings the case to Kanaan & Tilney for a second opinion.

Similarly defiled corpses pop up around Boston as they race to find the killer. All the victims are packless Beasts, like Lowell, and the vicious nature of the killings stir up old prejudices in the praeternatural community. Throw a personal vendetta and some ugly family history for Lowell in the mix, and the trails are as muddy as ever. It will take everything Kanaan and Tilney have, as a team and a couple, if they hope to stop a serial killer—and survive doing so.


Kanaan & Tilney: The Case of the Undead Wood 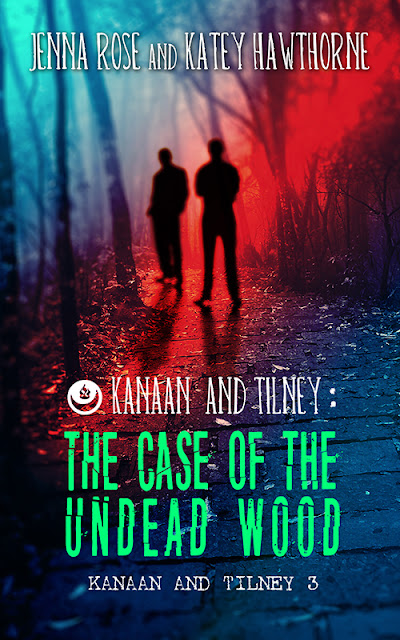 Cover by Aisha Akeju
Kanaan & Tilney: The Case of the Undead Wood
Coming August 28 from these online places!
Praeternaturals—people with paranormal powers—all over Boston know Lowell Kanaan and John Tilney for their discretion and forthrightness as private detectives. They’re also about to move in together, and John seems to be dragging his feet for reasons Lowell can’t fathom. Personal worries are quickly put aside, however, when they get a top-priority case: someone has introduced a blight into the Terran Garden, a kind of living graveyard for dormant Terrans who’ve become one with trees.
Most blights don’t cause trees to start craving human flesh, but somehow, this one has, and one Gardener is already dead. If Lowell and John can’t navigate the back-channels of Terran politics and secrecy quickly enough, more dead will certainly follow. Accusations abound: a Necromorph revenge plot, a widower’s anger, a friend’s jealousy, political maneuvering, or simply an ugly accident. The only thing that’s clear is the carnage will get worse until Lowell and John discover who introduced this new blight and why they’d desecrate sacred Terran ground.
Just when Lowell was starting to think he’d seen it all… foliage zombies.